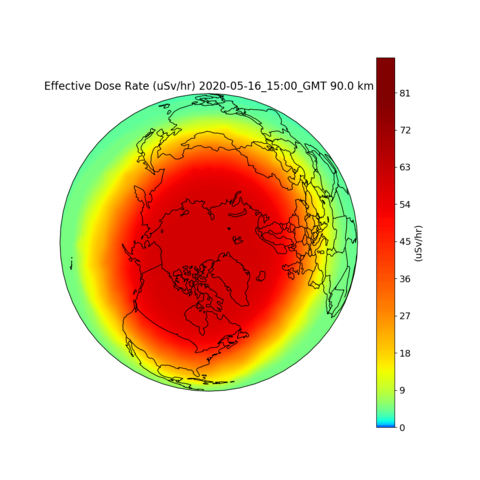 SAN FRANCISCO, CALIFORNIA – A group of researchers led by NASA, in collaboration with Space Environment Technologies, Inc., the National Center for Atmospheric Research (NCAR), and Dartmouth College, are building a model that can predict the solar and cosmic radiation exposure for crews and passengers on commercial airline flights. Researchers will be presenting their preliminary work at the American Geophysical Union meeting in San Francisco on Friday, Dec. 19.

While it may not be commonly known, airline flight crews are currently classified as “radiation workers,” a federal designation that means they are consistently exposed to radiation. Flight crews on high-latitude routes, in fact, are exposed to more radiation on an annual basis than nuclear plant workers.

But unlike in other fields, radiation exposure is not measured in the airline industry, nor are there standards or limits regarding exposure.

A NASA Applied Sciences project called NAIRAS, Nowcast of Atmosphere Ionizing Radiation for Aviation Safety, seeks to build tools that use real-time data and modeling to estimate radiation exposure. The issue has been of concern to pilots, crews and scientists for some time, but this will be the first real-time, data-driven, global model to predict not just cosmic background radiation, but also radiation during solar storm events.

Passengers and flight crews are exposed to radiation because the shielding from Earth’s atmosphere against high-energy solar particles and cosmic rays is weaker at normal cruising altitudes than at the surface. The threat is even greater for flight paths that take planes near the poles, because the momentum shielding by Earth’s magnetic field is weaker at high latitudes. The concern is greatest for flight crews and frequent flyers because of their consistent exposure over long periods.

Christopher Mertens, a senior research scientist at NASA Langley Research Center and the NAIRAS principal investigator, said the model should provide the most accurate estimations yet of the biologically damaging radiation doses received by airline crews and passengers. The model will use measurements from ground-based neutron monitors, atmospheric temperature and density, solar particle flux and solar wind parameters to “nowcast” exposure levels. Measurements from the NASA Advanced Composition Explorer (ACE) spacecraft and NOAA GOES satellites are used in the model.